Compliance for each transaction with Talium Assets

The various financial intermediaries are subject to an obligation of vigilance in accordance with the various laws aimed at combating money laundering and the financing of terrorism. Even if the KYC is respected by all actors, it is insufficient for full compliance.

The fight against money laundering and terrorist financing is a recent concern. It is only since the 1990s that directives and laws have regulated these risks at the international and national levels. At the international level, it is thanks to the FATF recommendations that we have seen the emergence, nationally, of laws to combat money laundering and terrorist financing (AML/CFT). The recommendations focus on the identity of the issuers and recipients of transactions.

It was in 1993 that the first laws regulated Know Your Customer (KYC) in the United States following the 1993 World Trade Center attacks and the Gulf War. The goal is to fight against fraud, as well as domestic and foreign terrorism.

In 2018, at an international level, the AMLD 5 directive extends regulation to, among others, virtual assets service providers (VASP) and crypto-assets wallets.

As its name suggests, the KYC is all about getting to know your customer. As we saw in the previous section, this ambition of LCB-FT appeared in this context. This requirement responds to an obligation of vigilance and an obligation of information to investors. The acronym KYB (Know Your Business) is used in the context of the knowledge of legal entities.

In France, the complete list of entities concerned by the obligation to carry out a KYC is available in Article L561-2 of the Monetary and Financial Code. It concerns among others:

The KYC is not sufficient to be compliant at all times, the data is updated according to periods defined according to the level of risk of the person concerned.

The FATF Recommendations go much further than the KYC, they define LCB-FT practices that encourage the entity to monitor the amount and periodicity of financial transfers in order to detect suspicious behavior. This is only possible with the KYT.

KYT (Know Your Transaction) allows compliance at all times, on every transaction. It is a respect for compliance that goes beyond the simple examination of identities. KYT also makes it possible to study the behaviors of the various actors in a transaction to see if it is usual or in accordance with the revenue information transmitted, as recommended by the FATF. This allows many more variables to be fed into the algorithm, thus creating consistent compliance and meeting FATF recommendations, AML laws and various local regulations.

KYT is therefore not only essential for AML-FT compliance, but also for compliance under the articles of incorporation filed by companies. In the case of transfers of financial securities such as shares, there may be a case where a share buyback must be done with the agreement of all shareholders. The KYT allows, for example, to validate the transfer of a share from one person to another after the agreement of the other shareholders.

How to implement KYT in the blockchain?

It is possible to digitally record financial assets and securities on distributed ledger technologies (e.g blockchain). The digitization of these assets, securities, and the rights they confer on this type of register has many advantages that you will find in our article on tokenization.

In order to show you the specific advantages of KYT when selling digitized financial assets and securities, we need to remind you/learn a few things.

Blockchain (or more generally distributed registry technology): Distributed registers, like the blockchain, are data structure types. The information is reliably stored in them. So reliable that this technology is used for the transfer of value such as cryptocurrency and financial securities. Some distributed registers are public and therefore auditable by everyone, and others are private and auditable only by network participants.

Token: Tokens are the digital representation of financial assets and securities on the blockchain or other type of distributed ledger registry.

Smart-contract: Smart-contracts are autonomizing programs that run on a blockchain. There are several smart-contract protocols. They establish the rules for the creation, transfer, and destruction of tokens and are more or less configurable depending on the smart-contract protocol used. In these parameters, we also find the functions that allow making KYC/KYT (always according to the chosen protocol) during the transactions (transfers) of the tokens.

In the case of using an on-chain model, the smart-contract will be able to do the identity verifications related to the KYC in a register that is periodically updated. This model does not allow to go further and do KYT.

Only the off-chain model allows KYT to be performed and to be fully compliant with the LCB-FT regulation. Let’s take the example of Alice who wants to send Euros to Bob in exchange for a tokenized share, on the Talium Assets platform. When she makes the transaction, a first off-chain step is to realize Alice and Bob’s KYC according to the amount transited. This is very important because the level of KYC depends on the amount of the transaction. Also, laws may differ from country to country and may not allow a transaction above a certain amount. At this stage, the off-chain process can also allow the verification of the shareholder agreement. Thus, if the latter implies an agreement of all shareholders to validate the sale of the share, the off-chain process can take care of it.

Another advantage of the off-chain model is its adaptation to a very dynamic environment. Laws evolve quickly, particularly in the context of tokenized assets and securities, since the technology to do so is recent. Consequently, it is necessary to be able to modify the rules each time the law evolves, which is very difficult with an on-chain model. In the on-chain model, this requires rewriting the smart-contract, whereas, in the off-chain model, it will simply be an update.

Ask a demo of the Talium Assets platform

KYT is the Future of KYC 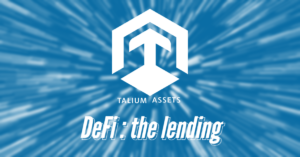