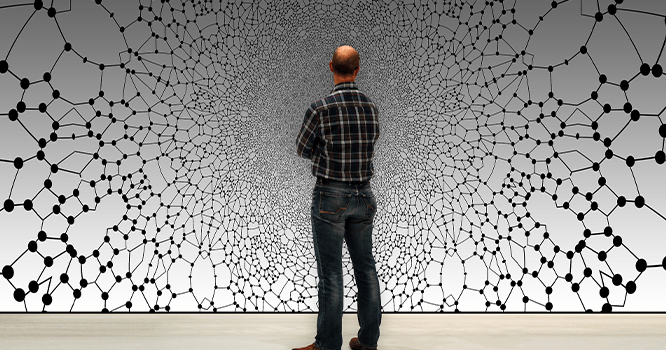 The digitalization of art thanks to tokenization and blockchain

The tokenization of works of art is one of the most presented use cases when talking about blockchain. This digitization can be done in several ways, more or less effective or relevant.

The blockchain is avant-garde

As we have seen in several of our previous articles, blockchain is a technology that allows to store information. The data is stored in such a way that it is impossible to modify or delete its content. It can only be added to. Thanks to this characteristic, the blockchain is used to transfer value (e.g. cryptocurrency, financial security), but also for certification. It is said that blockchain is immutable. The blockchain is part of the distributed ledger technologies, which have the same attributes (having the acronym DLT, for Distributed Ledger Technology).

The tokenization consists in digitizing, putting in the form of a token, a right on a blockchain/DLT. Thus, it is possible, for example, to tokenize financial securities on a blockchain to allow their exchange without going through a security account keeper, or to tokenize a work of art in order to certify its origin.

To go further in this article, remember the fungible nature of the token is important. A non-fungible token (NFT) is unique, it cannot be duplicated. In contrast, a fungible token can be part of a batch in which it will be perfectly interchangeable with other fungible tokens.

One of the biggest advantages of tokenization is that it makes markets more liquid. The liquidity of a market is determined by the ability of assets to be sold/bought. In the illiquid and unopened art world, this is a very interesting advantage.

How to tokenize art?

The example most taken up by the crypto-sphere when talking about tokenizing art is Mona Lisa. Indeed, estimated between 1 and 2 billion euros, it is obvious that even for someone who has a well-filled wallet, it represents a significant investment. However, in France, the law forbids the sale of paintings belonging to museums: “The goods constituting the collections of the museums of France belonging to a public person are part of their public domain and are, as such, inalienable”, as stated in article 451-5 of code du patrimoine.

If we take the painting sold at the highest price during the auction, we find ourselves with Leonardo da Vinci’s Salvator Mundi. Made in 1500, the painting sold for 380M€ in November 2017. The buyer, the Crown Prince of Saudi Arabia, Mohamed Ben Salman was able to purchase the piece alone and in its entirety. But how many wallets can compete at auction?

Tokenizing a work of art can be done in several ways

The artwork can be tokenized as a non-fungible token (an NFT, using the ERC-721 protocol, for the initiated). This allows the authenticity of a work to be recorded on a blockchain type technology. A trusted third party is required for this registration. As ownership cannot be transferred on a blockchain, it is necessary to use the traditional method to register changes of ownership.

This non-fungible token ERC-721 can be split into several tokens (e.g. ERC-20). This makes it possible to bring in several buyers for the same piece of art, and thus to reduce the acquisition price (which is then partial). This does not change the need to go through a trusted third party and to continue to transfer ownership in the traditional way.

Although there are many technical purposes, the law limits the solutions for tokenizing art. In the case of the Mona Lisa, and the works belonging to museums, one can imagine that tokenizing them (without transferring property rights, nor giving any rights, just the right to resell one’s tokens) would allow the museum to finance the conservation of existing pieces and the purchase of new ones. Imagine, thanks to that, to be able to make the access to the museums free?

The tokenization of art with Talium Assets

The third way to tokenize art, which dispenses with a trusted third party and keeps the spirit of decentralization of the underlying technology, is to use security tokens. Security tokens are financial securities issued on a DLT (for reminder, blockchain type technologies). In fact, the idea is to tokenize art in the same way as real estate: it is the shares of the fund that owns the property that are tokenized. This does not allow to transfer the right of ownership of the artwork which remains that of the fund, but authorizes the holders of the tokens to benefit from the capital gain realized at the time of the resale of the good, or of their tokens.

In this case, with the ERC-1400 protocol, there is the advantage of being able to configure the rights of the token and modify them according to the evolution of the law. The Talium Assets‘ platform allows such tokenization.

Is it really relevant to tokenize art?